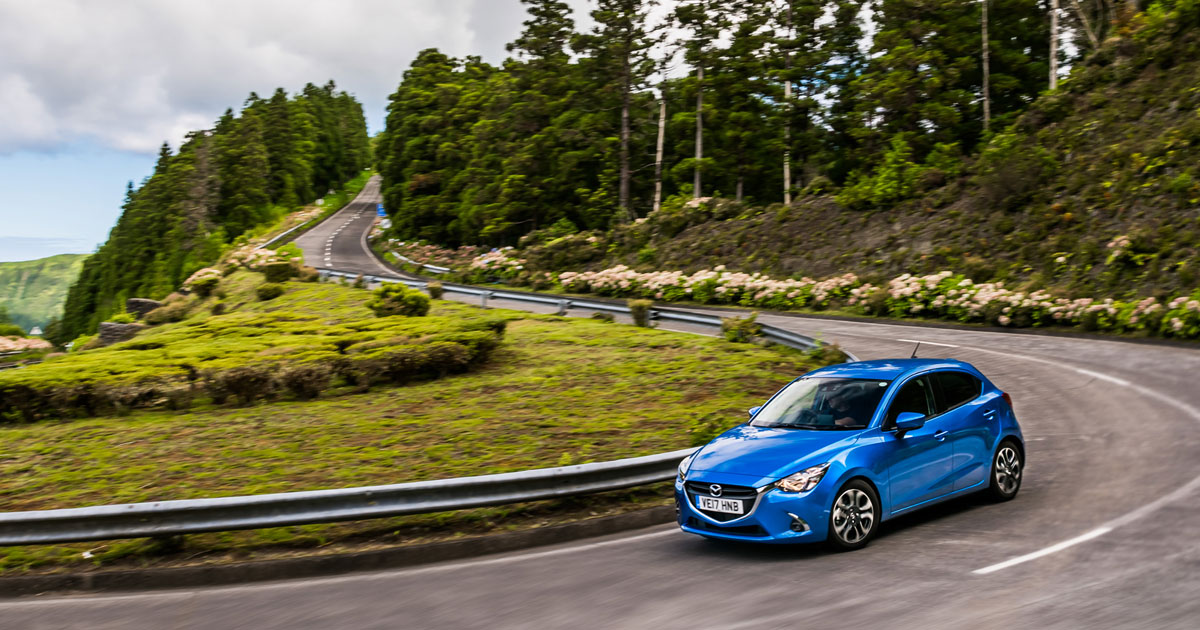 A century of history has seen Mazda transform itself from a manufacturer of cork products to a successful, independent global automotive company, and from the beginning, challenging drives have highlighted the key attributes and reliability of its vehicles …

From the beginning of Mazda a century ago, the company has never been afraid to highlight the capabilities of its engineering prowess by demonstrating its products in the public eye, putting them to the test on challenging, pioneering, and ambitious drives to prove just how good they are…

Today, these Epic Drive events – showcasing the innovation engrained into the human-centric development of all Mazda vehicles – offer challenging roads, stunning scenery, and a unique experience. Engineering originality has been at the heart of the company since its inception. This ‘never stop challenging’ approach, started from its very first vehicle: a three-wheeled open truck called the Mazda Go. Having switched from cork products to machine tools in 1921, new company President Jujiro Matsuda realised his company had the expertise to manufacture a product to meet the new demand for utilitarian three-wheeled trikes caused by the economic upturn in Japan. The first motorised vehicle ever produced by Toyo Kogyo, as Mazda was then called, already embodied the characteristics of the approach of the company to automotive innovation, as unlike lots of rivals, the Go had a ground-breaking rear differential and a reverse gear.

Introduced in October 1931, the Mazda-Go Type-DA was equipped with an in-house developed air-cooled one-cylinder 482 cc engine producing 7 kW. It was named Mazda in deference to both Matsuda’s name and Ahura Mazda, the Persian god of light, wisdom, harmony, and intelligence. A sales success, this first version was followed by more powerful DB, DC, and KC variants. 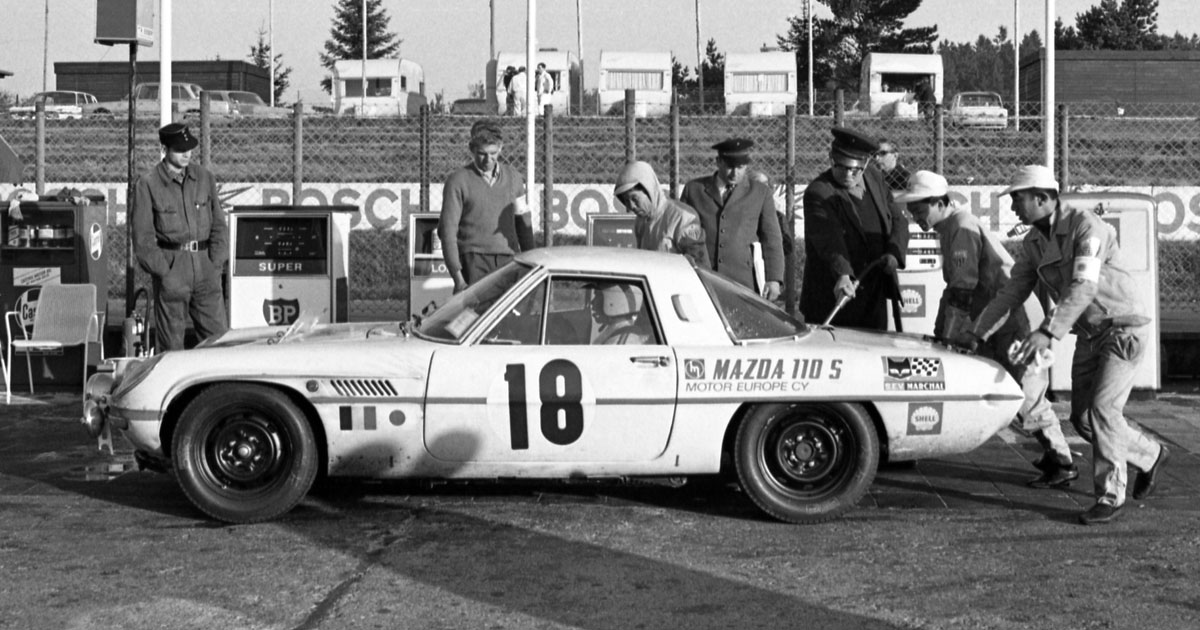 Kagoshina to Tokyo (1936)
As an early example of the willingness of Mazda to take on ambitious drives, the company in 1936 set out on a cross-country promotional tour with five Mazda-Go models (type KC and DC). Starting in Kagoshima near the southernmost tip of the main island chain of Japan, the expedition showcased the durability of the three-wheeler over 2 700 km of dusty, muddy, and backbone-rattling trails, arriving in Tokyo 25 days later. The publicity significantly boosted sales and raised the profile of the company. It represented the start of the heroic drives programme by the Hiroshima-based auto company to promote its products. Thirty years after this pioneering Mazda-Go expedition the now well-established Toyo Kogyo Company chose a tough motorsport events to promote its new ground-breaking sports car.

Marathon de la Route (1968)
Launched in 1967, the Mazda Cosmo 110S was the first production car in the world, with a twin-rotor rotary engine. Named after the late sixties’ fascination with the space race, this sleek sports coupé would spearhead an endurance driving endeavour to promote Mazda cars in the crucial European export market. An event created to replace the legendary Leige-Rome-Leige Alpine rally after racing on public roads in Europe became more difficult, the Marathon de la Route was no less challenging for man or machine. It was this race that Mazda decided to enter, as its first foray into international competition. To test the endurance and reliability of the rotary engine developed by Mazda, the company entered two Cosmos in the gruelling 1968 Marathon de la Route – a mind-boggling 84-hour race around the fearsome 28 km long Nürburgring in Germany. While one car crashed out of the race, the surviving Cosmo finished fourth, beaten only by two Porsche 911s and a Lancia Fulvia – at the time considered to be two of the finest sports cars in Europe. Mazda, the rotary engine, and the stunning Cosmo had made their mark, and today this epic endeavour stands as the first chapter in a motorsport history that saw Mazda take the rotary engine all the way to victory at Le Mans in 1991.

From Hiroshima to Frankfurt (1977)
As Mazda grew its global presence and fame through the sixties and seventies, it was not just on the racetrack that Mazda put its newest products through the toughest of public tests. In 1977, to promote the third-generation Mazda Familia, or 323, in Europe a pair of 323 hatchbacks made the 15 000 km journey from Hiroshima in Japan to the Frankfurt Motor Show in Germany. Incredibly, the two 323s drove through the Soviet Union at the height of the Cold War, and despite poor roads and tough conditions on the drive, they suffered practically no breakdowns – a real achievement that confirmed the reliability of the all-new hatchback even before it went on sale.

The repeat drives (1990 and 2013)
The epic drive undertaken by the plucky 323s and their incredible journey delivered plenty of press coverage, too, something Mazda would repeat in the future to promote its products. In fact, the famous 1977 expedition was echoed in 1990 when, in a sequel to the original trip, six Mazda vehicles (626s, 323s, and E2200 vans) drove from Hiroshima to the German headquarters of Mazda in Leverkusen, this time through the dissolving Soviet Union. In 2013, this time with journalists driving the cars, several third generation Mazda3s repeated the 1977 Japan to Germany, Hiroshima factory to Frankfurt Motor Show excursion, driving through Russia, Belarus, and Poland. 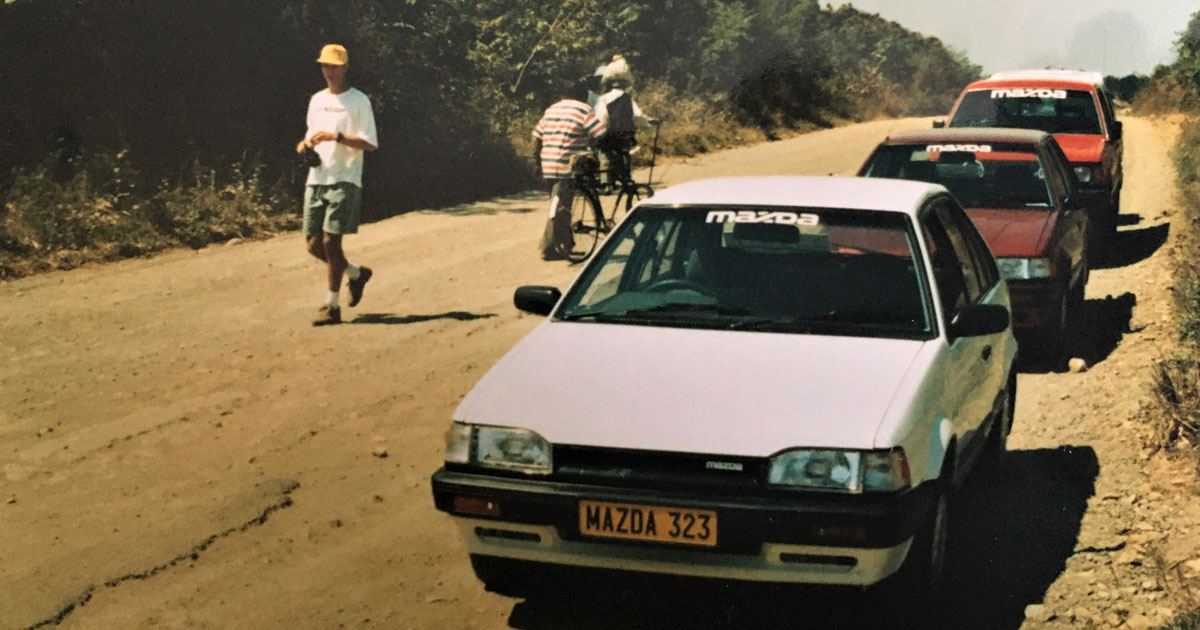 Local trips: South Africa to Uganda (1995)
The challenging international excursions, drives, and public vehicle tests also inspired the resident subsidiary of Mazda and in 1995 an extended journey through Africa was undertaken to promote the locally produced fifth-generation 323 (the third model range available in South Africa). Two 323 hatchbacks and a 323-based Rustler bakkie, with a B-Series bakkie as backup vehicle, travelled 5 500 km from Pretoria, South Africa, to Lusaka in Zambia, to Lilongwe, and Lake Malawi, and from there to Dar Es Salaam in Tanzania before finishing in Kampala, Uganda. The pair of compact hatches excelled on some of the most treacherous and rutted roads in Africa, the only damage during the adventure-filled drive being two tyres destroyed by potholes. In 1997 Mazda South Africa, then still part of Samcor, went to Austria to test-drive the latest updates on the seventh-generation 323-models, locally badged as Mazda Etude (sedan) and Astina (hatchback), in the slippery, snow-covered passes of the picturesque Alps region.

Iceland, Siberia, Azores, Norway
More recently, a series of Mazda Epic Drive media events allowed journalists to experience challenging roads, amazing scenery, and unique adventure in exotic parts of the world – lapping Iceland in an MX-5, or being the first manufacturer to cross Lake Baikal in Siberia to create a new route across its frozen surface in CX-5s. Other epic drives included savouring the twisting tarmac and volcanic beauty of the mid-Atlantic Azores in a Mazda2, exploring the wonders of extreme road engineering through the tunnels, bridges, and mountain passes in Norway, or driving an MX-5 to the most northerly point in Europe in the depths of Winter in temperatures as low as -30 degrees Celsius. The concept of using a challenging route to test man and machine is as strong today with Mazda as it was in 1936, when a group of pioneers set out to demonstrate the durability of the three-wheeled Mazda Go.