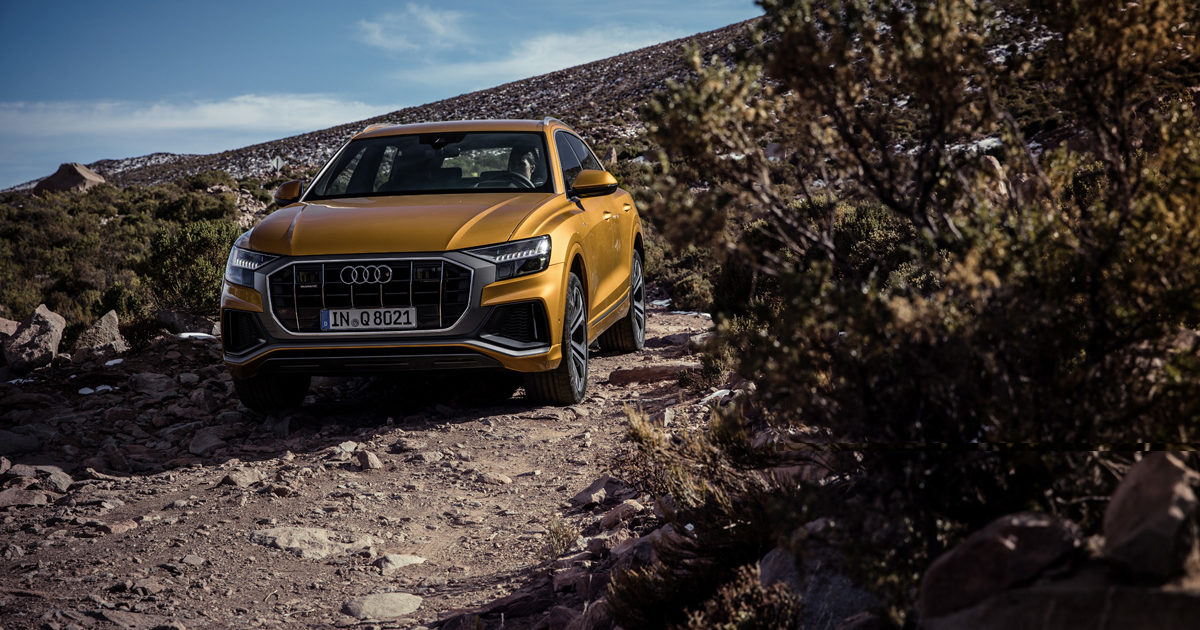 Since the arrival of the first crossover coupés with their tapered rooflines a few years ago, his opinion of them has vacillated between lukewarm and loathing, admits Bernie Hellberg Jr. Until the recent arrival of the stellar Audi Q8, that is … in his view a compelling luxury SUV that blends sportiness and utility like no other.

We saw the first production prototypes, still clad in black camouflage, testing in Namibia early last year, just before the world launch under the starry skies of the Atacama Desert in Chile. However, on hearing the name Q8 one can be forgiven for expecting this numerically superior Q-car to be an even larger and grander version of the already enormous Q7.

Set your eyes upon it and you swiftly realise the new MBE-platformed sports-utility bears little resemblance to its big brother. This is thankfully also true for its segment competitors, the Mercedes-Benz GLE Coupé and the BMW X6. It may be an SUV, but it is of the coupé variety, a fact quickly confirmed by the severe swoop of the roofline down to the glass.

In the flesh, however, this does not appear harsh, just beautifully sculpted, proportionally perfect, and a mere 38 mm lower than the Q7. The rest of the design looks like it was lifted from a science fiction movie poster. The ever-thinning headlights (now in an animated high-definition Matrix LED configuration) and expanding octagonal grille being the centrepiece of the new Audi design language. The taillights (also LEDs) feature an extended rear light strip across the breadth of the rear lid of the Q8 that comes to life in a signature illumination pattern when unlocking the car via remote control. 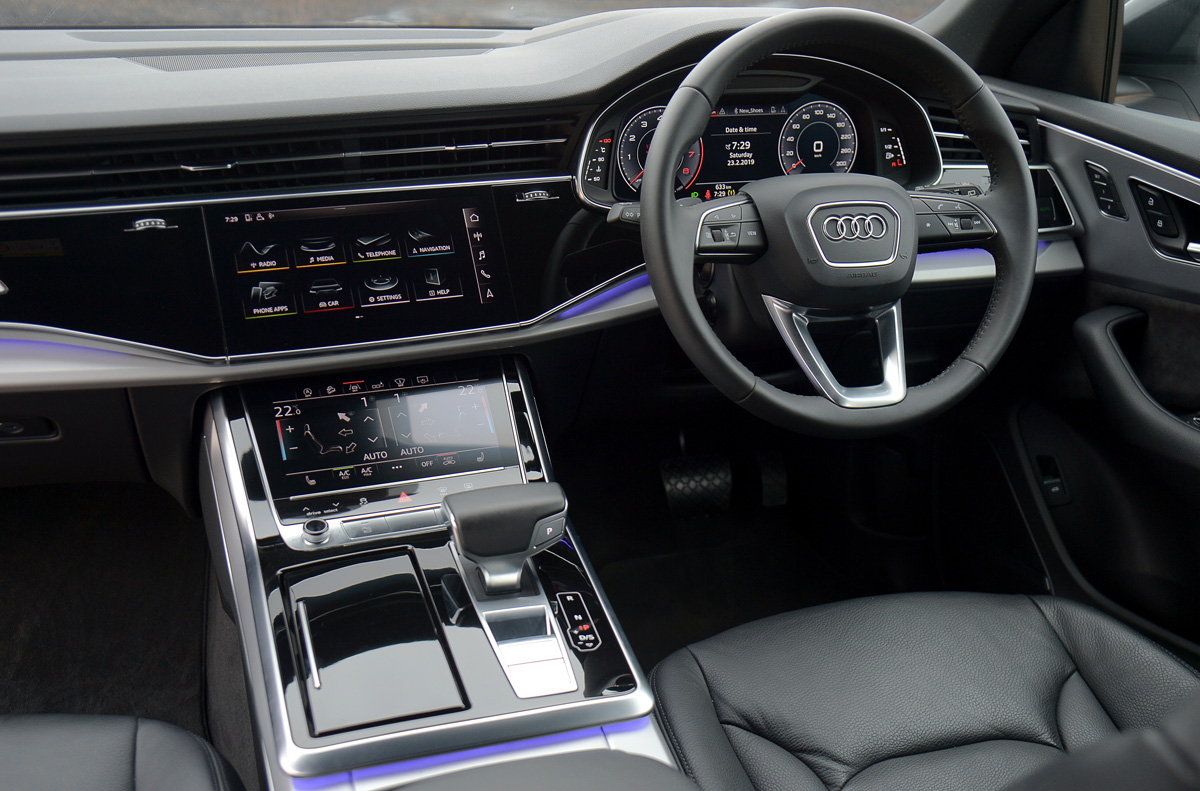 Unlike in many of its competitors, the Audi Q8 does not compromise style for spaciousness. Where the roofline dips, there is little if any noticeable loss of space in the cabin, particularly in the rear headroom department. At 1.84 m tall I could comfortably sit upright in the rear, while ingress and egress also are not as compromised as it is in the GLE Coupé, for example.

Although the Q7 packs up to seven seats, the Q8 maxes out at five and is only 66 mm shorter than its larger sibling. It is also 27 mm wider, a fact that adds to the feeling of spaciousness and helps the Q8 to reach a segment beating (according to Audi) load capacity of 605 ℓ.

Continuing the spacecraft theme inside, Audi’s MMI Touch Response infotainment system is one of the best available on anything bar the Tesla Model X. The first MMI system was revolutionary when it debuted, but in this form, it is simply sublime. Stacked one above the other, the 10.1-inch (above) and 8.6-inch screens contain the traditional entertainment, navigation, and phone components, while the latter maintains climate controls and other functions, including a writing pad.

The result is a fuss- and button-free system that provides haptic feedback like a smartphone (this still needs some work in my opinion, as the feedback seems to lag somewhat and requires vigorous touch to activate) and controls the formidable suite of techno bits of the vehicle.

Virtual Cockpit is added as a standard feature, as is a multiple-speaker Bang & Olufsen sound system with 3D virtual sound and in terms of interior trim, there is some of the usual vinyl-type material up top, with the vents cleverly hidden in the dashboard. Just the right amount of matte-finish wood adds a touch of luxury to the cabin.

At launch, the Q8 comes only in turbocharged petrol form, although a turbodiesel version is on the way by mid-year. The 3.0-litre turbocharged V6 turns out 250 kW and 500 Nm of torque and is good for a zero to 100 km/h sprint time of 5.9 seconds. During our launch trip, the Q8 felt more agile on the road than its big bro, despite being of similar heft, and its smooth V6 provided ample get-up-and-go when the throttle is encouraged.

The standard rear-biased quattro all-wheel-drive is always on and provided adequate grip when required. The eight-speed automatic transmission exists mainly in the background, and shifting was a silky affair that was hardly noticeable in the cabin. The Q8 also has a new 48-volt mild hybrid system (MHEV) baked into the drivetrain but this has limited functionality – not doing much other than lengthening the stop-start system time and reducing consumption by up to 0.7 ℓ/100 km, according to Audi. It is a far cry from the EQ Boost system of Mercedes-Benz, which can provide additional power and torque in small bursts but a step in the right direction for future Audis. 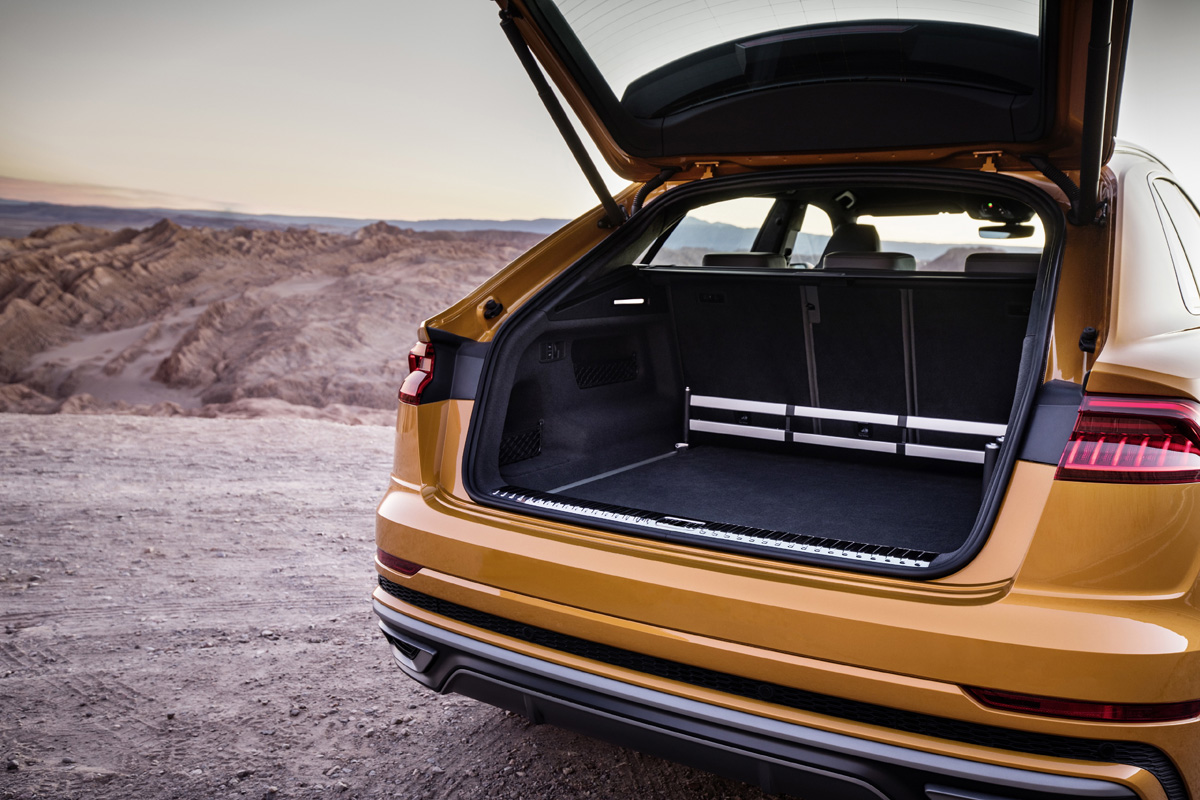 The new Audi Q8 has both old and new competition to contend with – current BMW X6, incoming Mercedes GLE Coupé, and Porsche Cayenne Coupé being the most prominent. Having entered this round batting against the idea that an SUV coupé could be anything more than a compromise of fashion over function, the Q8 well and truly caught me out.

The coupé is both stylish and capable and has plenty of space for people who expect both these attributes, and more. Audi has come out swinging with the Q8, and in my opinion, it is worth every cent of its R1,388,000 base price tag.