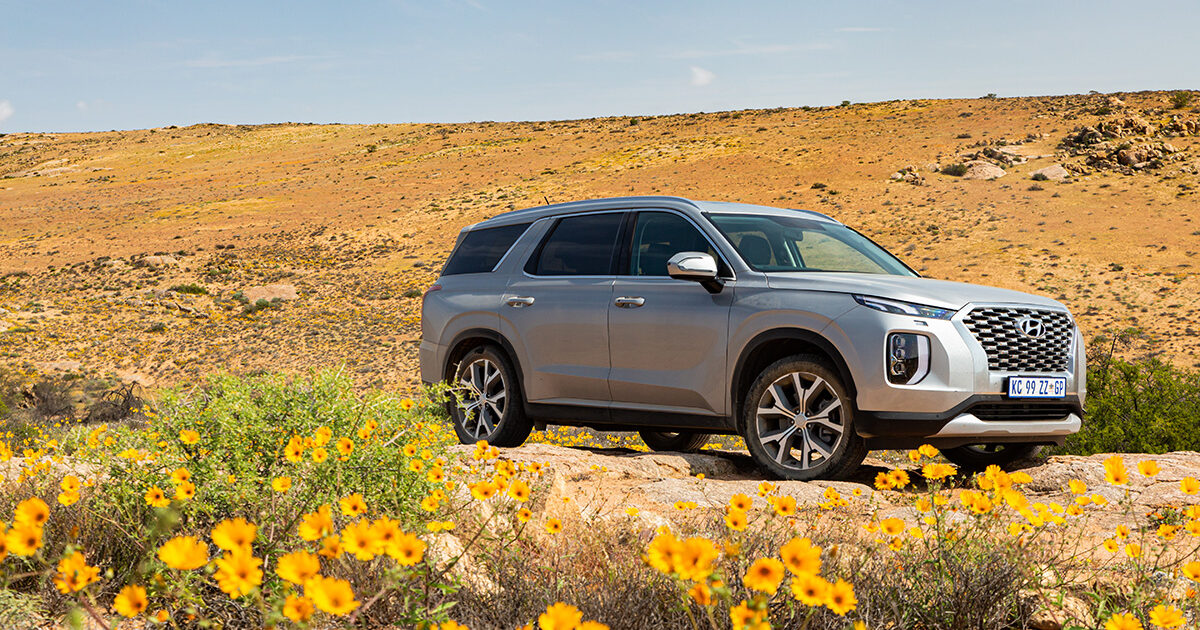 The local introduction of the palatial new Palisade coincided with probably the most spectacular West Coast flower season in recent years, so we set course for Kamieskroon and the Namaqua National Park to admire the blooming splendour from the comfort of the new seven-seat Hyundai flagship.

Contrary to what you may think the new Palisade flagship SUV from Hyundai was not named for the type of fencing that earned South Africa a mention on Wikipedia. No. It was actually named after Pacific Palisades, a neighbourhood of Los Angeles, California (also nicknamed “the Palisades” or “Pali”) – in accordance with the policy of the South Korean carmaker to name its SUVs after cities in the United States…

Complementing this is the fact that the seven-seat Palisade was developed specifically for the US market, where it is up against a whole host of contenders, including the Jeep Grand Cherokee, Ford Explorer, Honda Pilot, Mazda CX-9, Subaru Ascent, Toyota Highlander, Nissan Patrol, and the Telluride from sister brand Kia.

Most of them are unavailable in South Africa, so besides the Jeep and Nissan local competitors – according to Hyundai – are the Toyota Land Cruiser 300 and Land Cruiser Prado, the Land Rover Defender, the Mercedes-Benz GLE, the BMW X5 and the Audi Q7.

With a length of nearly 5 metres and a 2 900 mm wheelbase the Palisade cuts a formidable figure, but not overly so, as in terms of size it is virtually identical to the Prado and Grand Cherokee…  It does display some very American design traits, though, and with its back-swept C-pillars, panoramic glass side graphic and low profile (relative to its dimensions) there is more than a passing resemblance to the Chev Suburban and Lincoln Navigator.

It takes its place in the local Hyundai SUV line-up next to the slightly smaller Santa Fe, as well as the Tucson, Creta and the compact Venue and according to Hyundai offers exceptional comfort, space, technology and safety in a large SUV, with seating for up to eight and a commodious cargo bay.

Looking at the Palisade one must agree with the official description by Hyundai: Its styling conveys dignity with style in an understated way that demonstrates clear differentiation worthy of a flagship SUV. The wide, cascading grille is bold and domineering, and the composite LED headlamps with LED daytime running lights create a strong and distinctive front demeanour.

From behind the multi-function steering wheel the openness and spaciousness of the cabin is apparent, with centre console innovations such as shift-by-wire transmission controls (Hyundai-speak for the three buttons you select to find the right gear-link) free up valuable space. The system also includes automatic park logic that shifts the vehicle into park when the engine is shut off.

The centre console bridge design also frees up convenient storage space underneath and the audio and nav display is on an 8-inch touchscreen, coupled with a 7-inch TFT LCD instrument cluster for the driver. We found it handy that two Bluetooth devices can be connected simultaneously to the infotainment system – one for a mobile phone connection and the other for audio streaming.

Panoramic rear glass coupled with a cutaway roof provides a generous sense of spaciousness to rear passengers, and the second-row captain’s seats (ventilated, **nogal**) can be moved forward and out of the way in a one-touch movement for easy access to the third-row seats, and the roof vent diffuser providing a partially diffused or fully diffused stream of air to the rear passengers, worked well.

There are seven USB outlets in the Palisade, and we found the outlets in the front seatbacks (as found on aeroplanes) to be really useful, as well as the wide-angle “conversation mirror” for the driver to clearly see passengers in the rear, and the Rear Seat Quiet Mode system allowing the front row occupants to listen to audio without it being transmitted to the back…

Up the West Coast

By now our Shimmering Silver Palisade has serenely passed Klawer on the N7, and after exploring the clever intricacies of the interior we could relish in the comfort of the big seats and the smooth ride quality of the big SUV.

With a low 0.33 drag coefficient (Cd). achieved with design cues such as a fast A-pillar angle, rear spoiler side garnish, aero underside panels and rear wheel aero deflectors, wind noise was minimal, and even on big 20-inch rubber road noise was subdued.

As we travelled through the unfamiliarly green Knersvlakte, it again was clear the special efforts by Hyundai to reduce noise, vibration and harshness levels has paid off. Noise from the established 2.2-litre CRDi engine (also found in the Santa Fe) was restrained and the eight-speed auto transmission did its work seamlessly and accurate.

Delivering 142 kW of power and 440 Nm of torque, the willing four-cylinder turbodiesel engine easily propelled the SUV forward at cruising speed but it felt slightly lethargic under acceleration, sometimes slightly struggling to get the 1 820 kg behemoth (still lighter than the Prado and Grand Cherokee, though) going.

Even so, it was frugal, and we recorded consumption of just under 10 ℓ/100 km on our journey (Hyundai claims 8.2 ℓ/100 km). Its torsional body rigidity made the Palisade feel solid on the road, and with its long wheelbase, optimised and lightened suspension and HTRAC all-wheel drive system it was poised in the corners (even better than the Santa Fe).

After Garies, and close to Kamieskroon we turned off towards the Namaqua Park on a graded dirt track. modes The AWD with multi-terrain mode system with driver selectable modes (Sand, Mud and Snow) and an AWD locking-differential function, provided good control on the dusty road, and even in mild off-road conditions inside the park, the Korean never lost its composure.

This made our flower-gazing even more pleasurable, and the flower extravaganza – a rapture of colour from yellow and white daisies, purple and red flowers, and later on fields of bright orange blooms – did not disappoint. We even saw a herd of oryx trekking over the colourful pastures

After the Skilpad rest camp we followed the route towards Kamieskroon before turning back towards Vanrhynsdorp – our overnight spot. After a long day admiring the natural splendour of the area and its flower paradise, we soon stopped at the four-star Letsatsi Lodge.

Here we enjoyed a hearty supper and some drinks before turning in for the night, and the next morning, we hit the home stretch. Equipped with several ssafety technologies (Blind Spot Detection, Rear Cross-Traffic Alert, Safe Exit Assist, and Rear Occupant Alert) the Palisade again impressed with its stability and smooth gait on the long road back,

At under a million Rand, including a seven-year/200 000 km warranty and seven-year/105 000 km service plan, Palisade is well-priced against its competitors, with the Prado 2.8GD VX going for R1 127 100 and the Land Rover Defender 110 S for R1 159 100, and if you are not into serious off-roading but wants a spacious seven-seater with some off-road capability for long road trips, the new Hyundai flagship is the clever choice.

However, with horsepower seen as a status symbol in this segment, and consumption not counting for much, perhaps Hyundai should consider making the 216kW petrol-driven 3.8-litre V6-model available here as well…