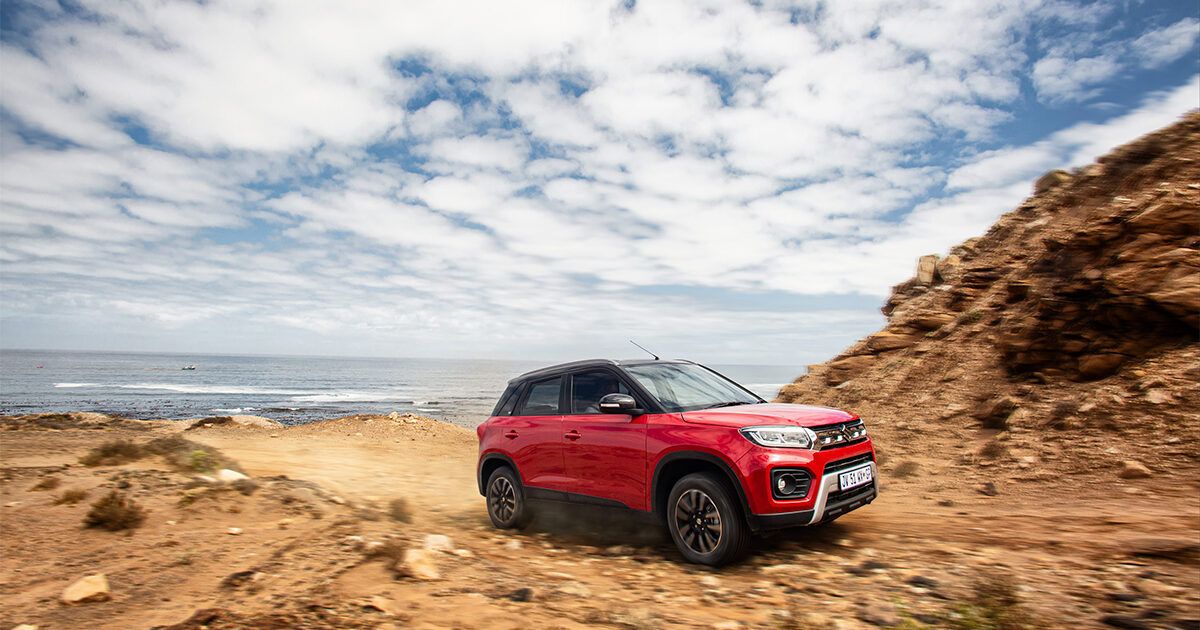 The new Vitara Brezza has recently wafted into the country, and in keeping with the Way of Life credo of Suzuki, it is a nimble urban runabout with the ground clearance, ride height, and interior space of a true SUV. We took the flagship GLX auto model to Strandfontein on the Cape West Coast to shoot the breeze for a day or two…

Sitting on the harbour pier at Doringbaai on a balmy West Coast Autumn day, I could not help but remember the words of the Otis Redding song … “I’m just sittin’ on the dock of the bay … Wastin’ time …”

We were not really wasting time, though; we were filling it with informal conversation and banter, deliberating the recent history of the small fishing community while we sampled some local Fryer’s Cove wines and West Coast fare. Shooting the breeze, so to speak.

While the area has been inhabited for centuries, the small town of Doringbaai was first settled in 1925 when the North Bay Canning Company instructed a Dutchman named Koos Bleeker, to establish a crayfish-packing factory in the West Coast area.

When he arrived in Doringbaai, he found nothing more than an abandoned wooden shack, but there was no shortage of crayfish. Bleeker set out to find locals who would be willing to help with the construction of the factory, and one of the first to assist was Jan Laubscher from the Sandveld. The Laubscher brothers were still farming in the area in the early 2000s and the Fryer’s Cove vineyards were founded on part of their farm.

Fryer’s Cove was named after the British settler Richard Fryer, the first commercial farmer in the area who entrenched a tradition of community investment in the area when it was still used to anchor trade boats with goods transported to Vanrhynsdorp by camel from the Bay.

Today, there is not a camel in sight and the fishing factory has closed, but the lighthouse with its black band, rebuilt in 1993, still watches over the small rocky outcrop. Fryer’s Cove – as one of the last outposts for traditional West Coast hospitality – remains involved in school sponsorships and job creation efforts in the area.

Our Vitara Brezza GLX auto model in striking Sizzling Red with a Midnight Black roof was perfect for the leisurely 600 km round trip up the West Coast to Doringbaai and Strandfontein.

First introduced in India in 2016, with the latest, upgraded model arriving last year, the Vitara Brezza has since become the most popular compact SUV in that country, accounting for 23% of its segment share and 11% of all SUV sales across all categories. To date, Suzuki has sold over 600 000 Brezzas.

On the rough dirt roads leading off the R364 from Piketberg over Leopoldtville and Graafwater towards our destination – as well as on service roads next to the sea for alluvial diamond mining activities – the higher ground clearance of the Brezza was a plus factor. It ensured a comfortable ride and assisted the front-wheel-drive SUV to negotiate small obstacles and quite deep ruts.

After our quick visit to Doringbaai, we wafted into the quaint and quiet village of Strandfontein. Located on the West Coast Way Wild Route – as well as the newly launched Cape Way Route – but away from the main routes – the small town is an ideal getaway spot.

It has evolved into a favourite tourist attraction for its pristine coastline where whales and dolphins frequent the sleepy shores. It is also part of the Namaqualand Wild Flower Route and an ideal stopover for those travelling from Namibia along the N7. Our destination in Strandfontein? Sea Breeze self-catering apartments, of course …

Located in Hoogstraat, the apartments have a birds-eye-view over the town and endless white beaches – great for jogging along the pristine coastline – and you can opt for activities such as hiking or mountain biking, kayaking in the ocean or on the Olifants River, wind surfing, body boarding, diving, snorkelling, or spearfishing (but be warned, the water is brrr-cold).

More relaxing pursuits include bird watching, swimming, a round of golf, wine tasting, or a visit to the Wandering Whale Labyrinth, an inner five circuit labyrinth based on the one built at the Chartes Cathedral in France. Situated on a clifftop South of Doringbaai, its paths are made from blue mussel shells and rocks with a rose-pink quartz centre, handpicked by the community.

Finding our way via the Apple CarPlay phone interface on the large seveninch touchscreen infotainment system in the Suzuki, we also went to the Labyrinth of Memories, near Papendorp North of Strandfontein, hand built with stones from the original “Viswater House” of Lady Fryer – wife of Richard Fryer who built the first school in Strandfontein.

In the GLX, the infotainment system also displays the image from the reverse camera, and Bluetooth, an auxiliary input, and a USB port are standard. It also displays vehicle information and alerts and allow hands-free control of the system and the phone interface via steering wheel buttons or with voice commands.

Standard is climate control, electric windows, a leather trimmed steering wheel, an interior light package (with five mood colours for the instrument panel), some silver interior highlights, a front centre armrest, a push-button starter, keyless entry, and rain-sensing wipers. But the cooled upper cubbyhole was the handiest addition, keeping our drinks cold during the journey …

The tried and tested K15B naturally aspirated 1.5litre, fourcylinder petrol engine (as also used in the Jimny, Ertiga, and Ciaz) delivering 77 kW and 138 Nm of torque with drive distributed to the front wheels via a four-speed auto transmission, felt peppy and lively in this global best-seller and 2017 Indian Car of the Year.

However, with fourth gear in essence an overdrive gear, the auto ’box started to hunt on inclines, and this was somewhat irritating. While this normal transition can be disabled with a gear-mounted switch, it leads to a noisy drive and higher fuel consumption. Still, the Brezza was an agreeable companion on the open road … fun to drive and quite frugal.

With a retail price of R309 900, the Vitara Brezza can stand its ground against competitors such as the Ford Ecosport, Hyundai Venue, Mahindra XUV300, Honda WR-V, as well as the imminently expected Nissan Magnite and Kia Sonet. However, its biggest contender will be the Toyota Urban Cruiser clone …

A class-leading fouryear/60 000 km service plan and a fiveyear or 200 000 km promotional mechanical warranty assures peace of mind, so all you need to do is set the mood lighting of the Brezza in the digital information to blue … and head off to Strandfontein to experience total relaxation, peace, and tranquillity.